Following on from my recent Linux web server benchmarks, I’m going to be performing the same tests on all current generations of Microsoft’s IIS web server.

Here I’ll be performing benchmarks against the below versions of the IIS web server and then comparing them against each other to get an idea of which one performs the best under a static workload.

Where -n is the number of requests, in this case we are sending 1,000,000 requests for every concurrency level of -c specified. Thanks to ab.c, we are able to step through from 0 simultaneous requests up to 1,000 in increments of 10 at a time. Each test is also performed 2 times as specified in the rounds, this way I am able to get a better average result as each concurrency level is run 2 times. In total every test at each core level therefore results in around 200,000,000 GET requests being sent to the web server at http://x.x.x.x:80/index.html. In total 3.2 billion GET requests were completed to determine the results below.

In order to perform the tests I made use of four Windows virtual machines that were running on top of VMware ESXi 5.5, so while an extremely small amount of additional performance could have been gained from running on bare metal, making use of virtual machines allowed me to easily modify the amount of CPU cores available when changing between the tests. I’m not trying to get the absolute best performance anyway, as long as each test is comparable to the others then it’s fine and I can adequately test what I am after.

It is important to note that these web servers were only serving a static workload, which was an 8 byte index.html page containing the string “Testing.”. The goal of this test was to get an idea of how the different versions of IIS performed with raw speed by serving out the same file. I would be interested in doing further testing in the future for dynamic content such as ASP/PHP, let me know if you’d be interested in seeing this.

Otherwise all IIS settings were left completely default, no changes were made to IIS configuration itself.

No changes were made to the Windows operating system for these tests. All servers were fully up to date with all available Windows updates installed. Windows Datacenter edition with a GUI was used for all tests. 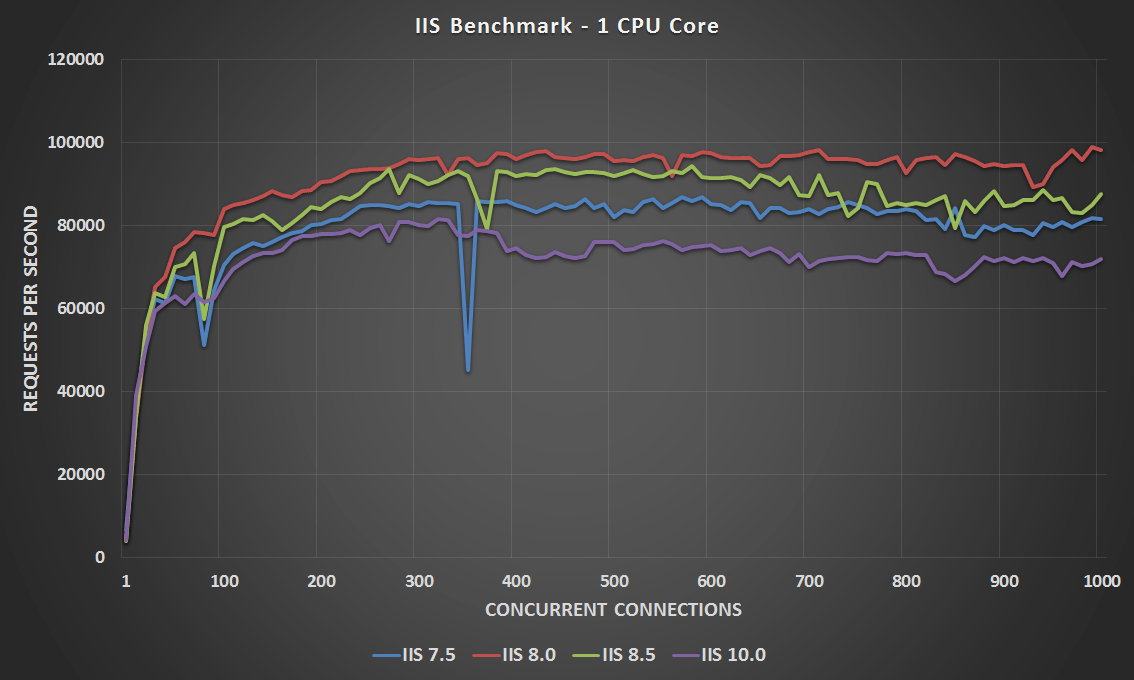 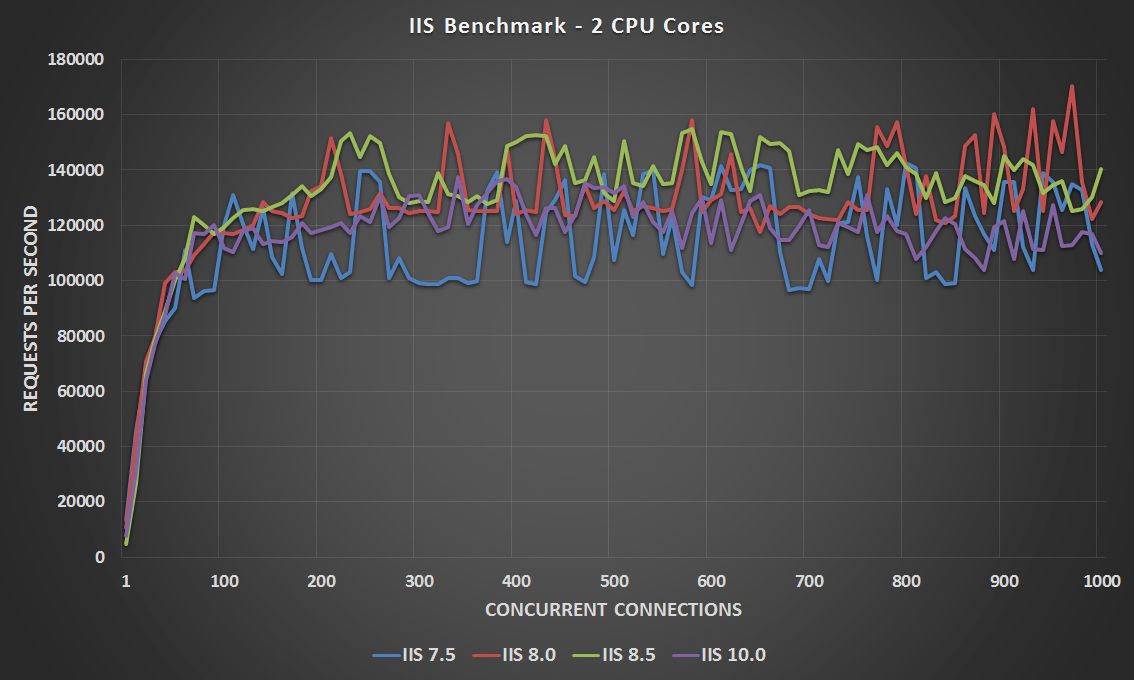 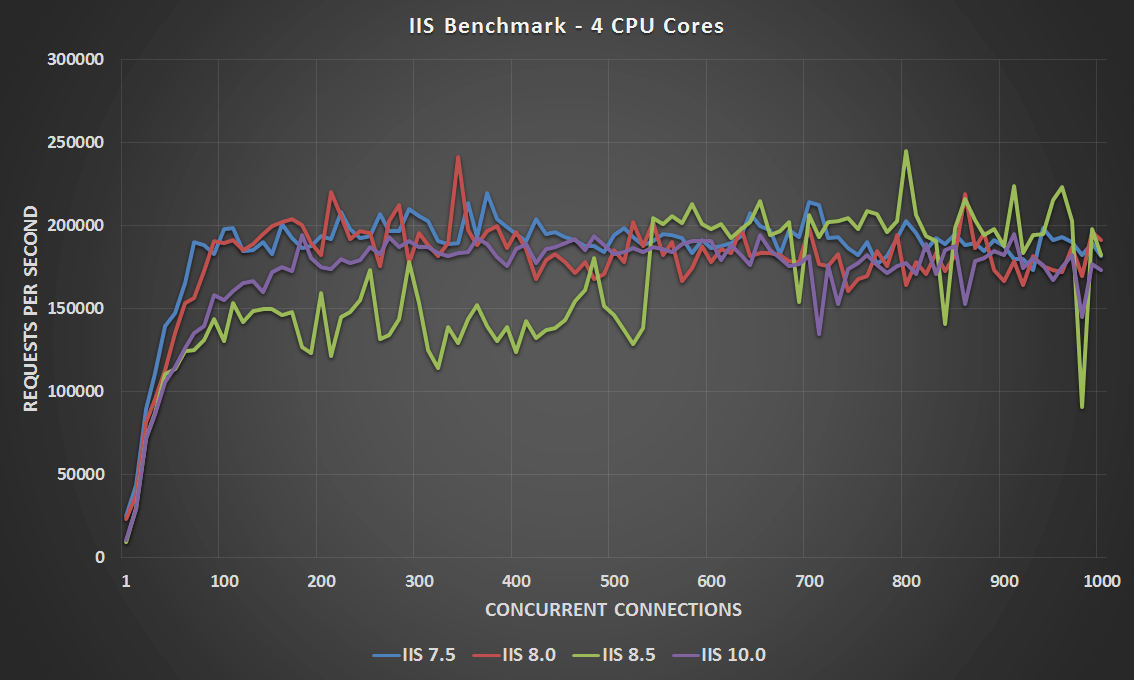 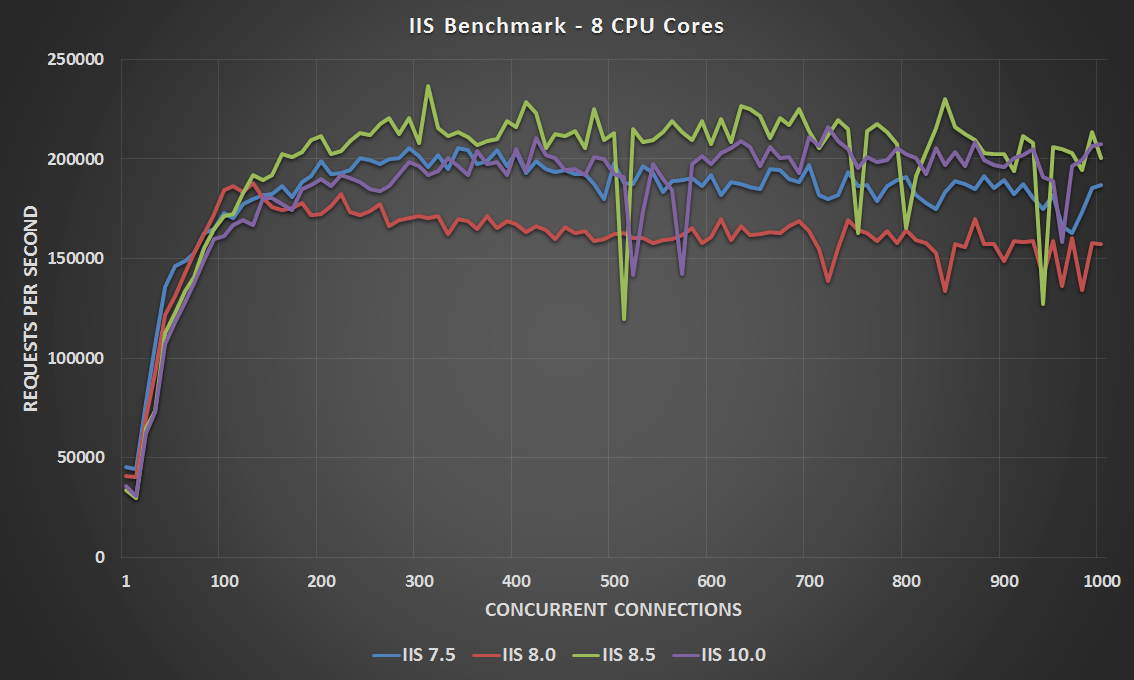 This final graph simply displays how long the tests took to complete in the format of hours:minutes:seconds. Keep in mind as mentioned previously each test will result in approximately 200,000,000 GET requests for the index.html page. 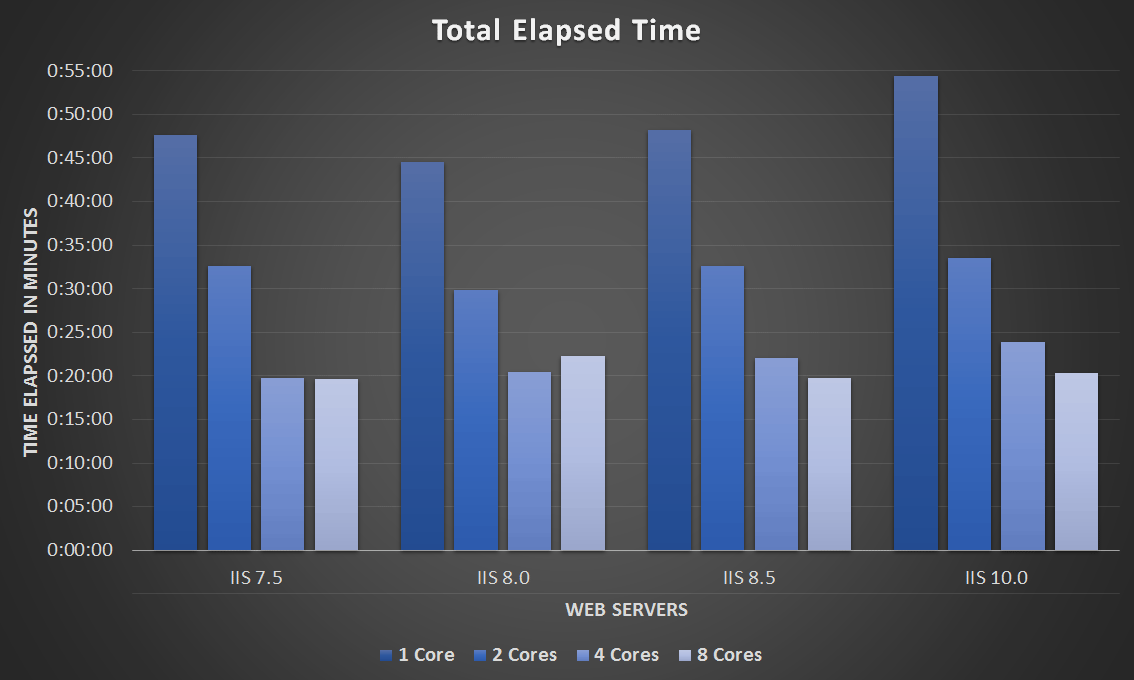 The results are definitely not what I expected. I actually re-ran some of the tests to confirm the results were accurate. In general, I assumed that newer versions of the Windows operating system and IIS would perform better, however this does not strictly appear to be the case as you can see. It’s also not the case that newer versions are always worse off either, when I saw the IIS 10.0 results my first thought was maybe either the OS or IIS itself had increased functionality somewhere that came at a performance cost.

If anything, we can see that at least newer versions of IIS (8.5 and 10.0) appear more scaleable out of the box with increased CPU core counts, as evidenced in the total elapsed time graph. While we can see diminishing returns in how quickly the test takes to complete, the differences between the 4 and 8 core tests are still different. The IIS 7.5 and 8.0 tests for comparison were close to the same and then worse off at the higher core count respectively. A core count of 4 seems to be the sweet spot here for best performance with IIS in a static workload with default out of the box settings, of course this may change with further tweaking of the configuration.

Also interestingly IIS appears to have beaten all Linux based web servers that I tested last year. So even if the results here don’t make the most amount of sense, it was very interesting that in this specific static workload test that the Windows web servers came out ahead in terms of raw requests per second.