I’ve been benchmarking different web servers recently and this post contains all of my results as well as information on how the tests were performed during the process.

I have benchmarked Apache 2.2, Apache 2.4, Nginx, Lighttpd, Varnish, Litespeed, Cherokee and G-WAN web servers when running on 1 CPU core, 2 CPU cores, 4 CPU cores and 8 CPU cores while loading a 100 byte static HTML page to determine the difference between them in performance. 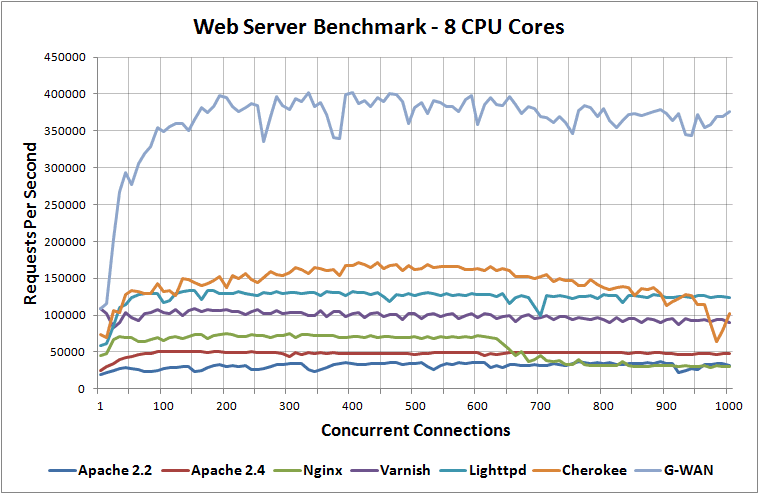 This was my first real attempt at a proper web server benchmark – I’ve had the data for a little while now so if there are any problems or issues with the tests that I have overseen please let me know.

Before the results I have a fair amount of detail explaining how the tests were performed, if you just want to get right down to the results scroll down.

For this test I had 8 virtual machines on top of VMware ESXi 4.1, so note that performance of the hardware may be skewed based on the hypervisor itself and the way it both manages and uses the available resources. With that in mind, all virtual machines were run under equal circumstances so while I am not benchmarking the virtualization the results from the web servers are still directly comparable against each other throughout my tests.

The web server versions tested are as follows, and were all the most up to date versions at the time of performing my tests.

The underlying hardware that VMware was running on top of was as follows:

The tools used for this test primarily consist of Weighttpd which is my benchmark tool of choice, and then Microsoft Excel for the simplistic graphs that display the results.

The classic Apache Benchmark (AB) tool was not used due to its lack of threading and being able to take advantage of how modern web servers run. I did experiment with this tool but found that it was giving very poor results in comparison to weighttpd.

These are the constraints around the tests that I ran, this will give you an idea of how the tests were performed and the reasoning behind that.

The weighttpd benchmark tool was run on the same server that the web server was running on. This will obviously mean that some of the resources of the server will be used for the benchmarking tool itself rather than all solely on the web server so it is important to keep this in mind. Many will say that not testing the network doesn’t constitute a “proper” benchmark, and to that I say that I am primarily benchmarking the web server software under equal reproducible instances. Of course there is overhead in the TCP/IP stack, I may test this in the future.

Weighttpd was run using this script from G-WAN developer, Pierre. The script he has provided allows you to run benchmarks at intervals in an automated manner, saving time and effort. Rather than running multiple tests manually at different concurrency levels the code above will do the lot for you.

Here is an example of what the script actually ran when compiled and executed.

Basically -n is the number of requests to perform, -c is the concurrency level and this is stepped through from 0 to 1000 in increments of 10. First 100,000 hits to the web server are completed at 1 concurrent request at a time, and then 10, 20, 30 … until 1000, increasing in steps of 10. On top of this the script runs 10 iterations of each command in order to get an average result, meaning in total there are 1,000,000 total requests to the web server.

-t is automatically detected, it is the number of threads to run and is dependent on the amount of CPU cores detected on the server. -k is for keepalive, and this was run on all tests as it is generally enabled on production servers – keepalive was also enabled in all web servers. The test is looking for 100.html which is hosted on localhost in every test.

Another thing the script does, is for each concurrency step it records the minimum, the average and the maximum requests per second. This means that at each point of concurrency, we have an average of 1,000,000 requests being completed in which to justify the result. I found better results by having this as a large number, the tests did take a long time to complete however it is more accurate as it allows the web servers time to peak.

As mentioned previously this test is comparing various web servers against each other under the same circumstances, which is loading a static 100 byte HTML page. You may not consider this a “real world” benchmark, however when benchmarking it is still worth gaining an idea of the “raw” performance of what the web server can do. Some times you want to know how fast your engine is, rather than how fast the car can go. That said it is still important to remember that you can’t ride alone on the engine, and that the car is limited to the engine speed.

Prior to every benchmark run the web servers were completely rebooted to ensure that none had any caching advantages.

To avoid “pointless” disk IO during the benchmark process, all error/access logging was disabled as such large numbers of requests were coming through that this was slowing down some runs.

Please note that the purpose of these benchmarks was to compare the web servers on the same hardware in a real world environment, not to try get best performance for each web server. While some configuration was changed to get better results there are of course other optimizations and settings that could be changed to slightly affect the results one way or another on all web servers.

The Litespeed web server was only benchmarked at 1 CPU and 2 CPU cores as this is all the standard licensing allows for. I thought it was still worth including the results in half my results to see how it compares.

I have made configuration changes to /etc/sysctl.conf on all virtual machines as various limits such as the amount of open ports was being in use was running out causing connection failures (ephemeral ports).

Here are my additions to /etc/sysctl.conf, you will see similar settings used throughout other various benchmarks to cut down on the TCP/IP stack being the bottleneck.

The maximum amount of open files was checked with unlimit -a, and /etc/security/limits.conf had the following defined.

Of course these values aren’t what you would use in a production environment, they are for the purposes of the benchmarking process.

This section details some of the configuration applied to the individual web servers. I didn’t make too many modifications as I am not trying to get perfect results on every web server, perhaps in an ideal world where I have more time I would do that. Also note that all tests performed went for quite a long time, and allowed the web servers such as Apache to start performing at their peaks.

Apache 2.2
Using the Worker Multi-Processing Module (MPM) the ServerLimit and MaxClients variables were set to 1000 were increased to allow for high concurrent connections.

Apache 2.4
The Event Multi-Processing Module (MPM) was used with Apache 2.4, as this allows more simultaneous requests to be served by passing off some processing work to supporting threads, freeing main threads to work on new requests.

Nginx
worker_processes was changed to match the amount of CPU cores for the test as I found this to give best results, so it ranged from 1, 2, 4 and 8.

Lighttpd
Experimented with server.max-worker and found that it performed well specifying this to match the CPU cores.

G-WAN
This was run with the -w flag to match the amount of CPU cores, so for example for the 8 CPU core test, ./gwan -w 8 was run.

Now that all that’s out of the way, here are the results of my benchmarking process as graphs. 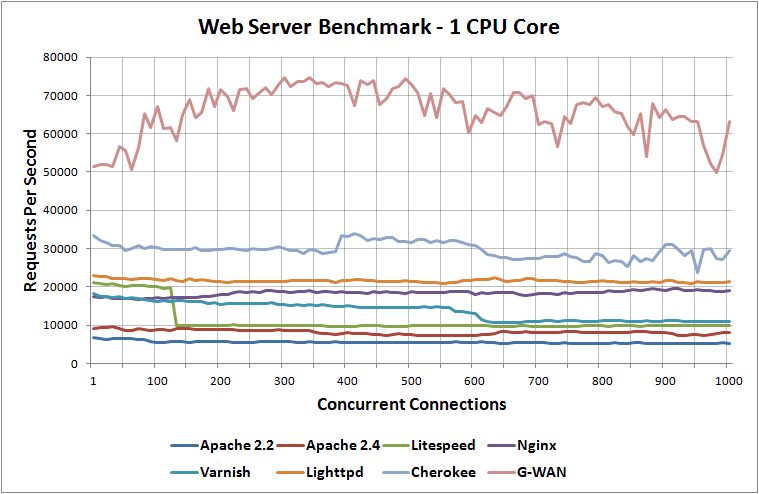 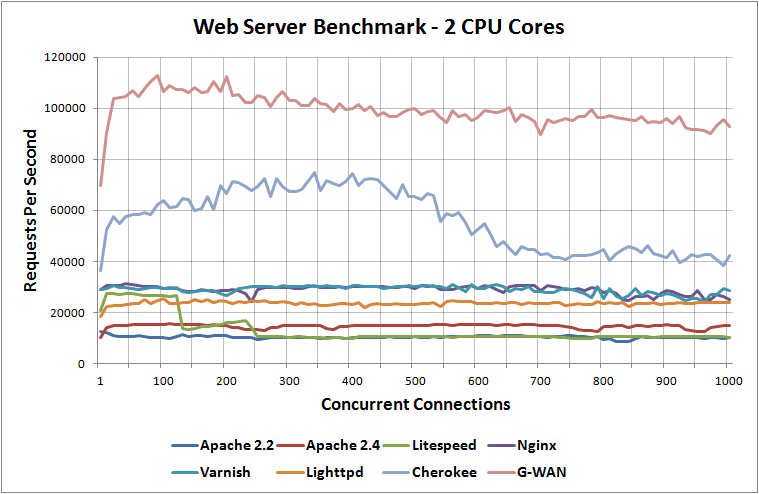 You can see in these tests that G-WAN is basically dominating the rest, it’s worth noting that this does not currently support PHP however I found it to be very interesting and less well known so thought I’d include it in my benchmarks.

Also in regards to Varnish as it is used as cache we would expect this to take the lead when benchmarking dynamic PHP content which I am keen to test in the future.

I have the total times that each benchmark took to complete, you can find a text file of that data here. Below is a graph of it giving you an idea of how long each test took for each web server, on each number of CPU cores. 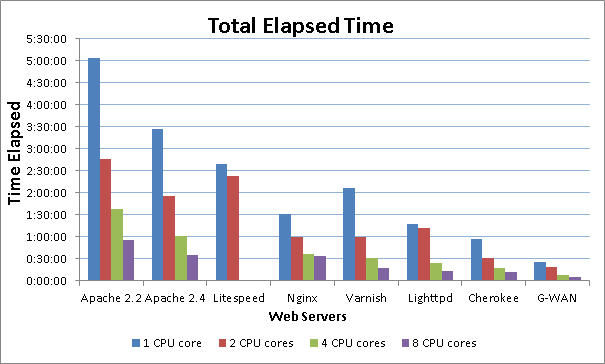 The times on the left are in the format of Hours:Minutes:Seconds.

There you have it, my tests purely of the web servers loading up a static page on localhost. I plan on performing similar tests on basic PHP pages or other web applications / content management systems to get a more overall realistic result as compared to a local static page benchmark. Until then I believe this data is still useful as it shows the power of each web server in these particular circumstances compared fairly against each other.

Before saying that these are not proper benchmarks, please consider the analogy I previously used. Some times you want to know how fast your engine is, rather than how fast the car can go. That said it is still important to remember that you can’t ride alone on the engine, and that the car is limited to the engine speed. This was a test of the engines available to us.