How To Login To Windows With A FreeIPA Account 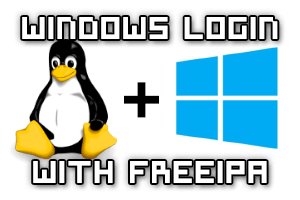 In most cases Windows desktops or servers will typically be joined to a Windows domain controller running Microsoft’s Active Directory, however this is not the only option.

It is possible to join Windows to a FreeIPA realm and then log into the Windows computer with an account from FreeIPA as it makes use of Kerberos for single sign on (SSO). FreeIPA is an open-source project sponsored by Red Hat, which attempts to provide similar functionality to Active Directory for Linux and Unix systems.

This may be a good option if you already run a large Linux or Unix environment, but need to have a small amount of Windows servers capable of using the same centrally managed user accounts.