How To Repair An AWS EC2 Instance Without Console

Recently while rebooting the web server that hosts this website in order to perform a kernel update I ran into a kernel panic on boot.

Amazon Web Services (AWS) do not seem to provide an interactive console for Elastic Compute Cloud (EC2) instances, so I had to work out another way to fix the problem which I have documented here.

First we need to identify what the problem actually is, I did this in two different ways. We can take a screenshot of the console, or view the log.

Right click the EC2 instance that is not booting properly, select Instance Settings, followed by either Get System Log or Get Instance Screenshot. 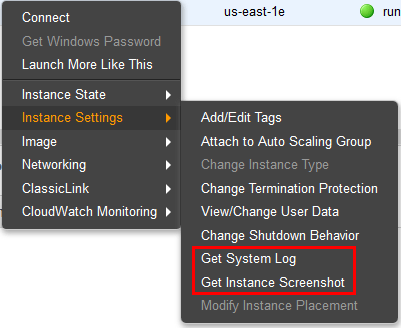 In my case both of these steps indicated that my system was failing to boot due to a kernel panic.

Now that we have identified the issue, let’s work towards fixing it.

If you like living on the edge you could also simply detach the original volume with the problem and attach this directly to the new temporary EC2 instance and fix it. I instead took the safer route of creating a copy to work on first, this way if you break anything you still have your original data.

Without the ability to interact directly with the virtual machine console of an AWS EC2 instance we instead have to go through this slightly more painful process to fix various problems. Basically we created a copy of the volume that has the problem, attached it to a temporary EC2 instance and repaired it. Once fixed we attached the repaired copy back to the original EC2 instance and booted it up successfully.

I’d really like to see an interactive console available for EC2 instances in the future from AWS, as this could have been used to fix the problem much faster.