The test server was running CentOS 7.1.1503 with kernel 3.10.0-229.11.1 in use, all updates to date are fully applied. The server had 4 CPU cores and 16GB of available memory, during the tests only one CPU core was used as all of these tools run single threaded by default, while testing this CPU core would be fully utilized. With XZ it is possible to specify the amount of threads to run which can greatly increase performance, for further information see example 9 here.

Each time the compression or decompression command was run, the ‘time’ command was placed in front so that we could accurately measure how long the command took to execute.

Below are the commands that were run for compression level 1:

All commands were run with the time command, verbosity and the compression level of -1 which was stepped through incrementally up to -9. To decompress, the same command was used with the -d flag.

The raw data that the below graphs have been created from has been provided in tables below and can also be accessed in this spreadsheet. 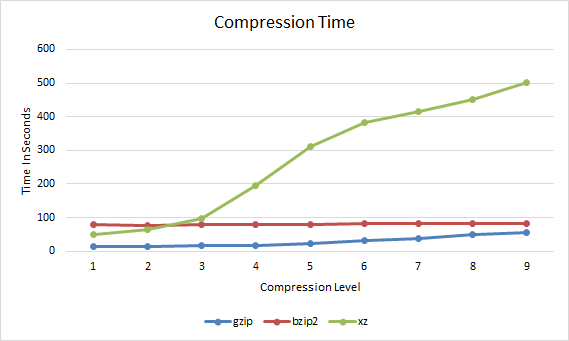 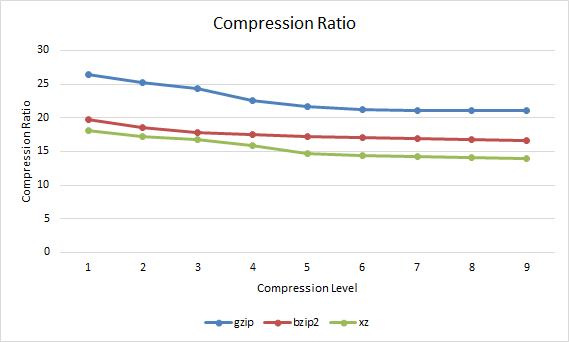 The compression speed in MB per second can also be observed. 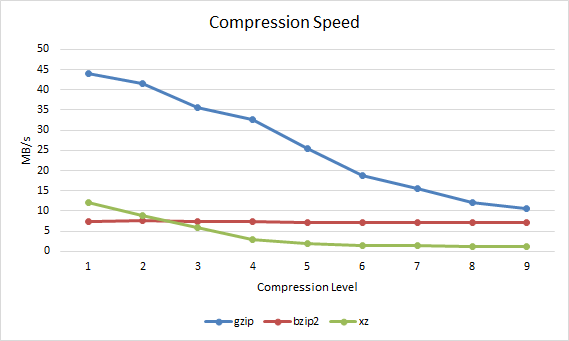 Next up is how long each file compressed at a particular compression level took to decompress. 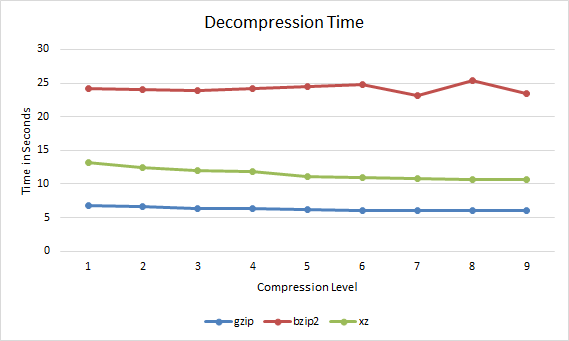 In all cases the file decompressed faster if it had been compressed with a higher compression level. Therefore if you are going to be serving out a compressed file over the Internet multiple times it may be worth compressing it with xz with a compression level of 9 as this will both reduce bandwidth over time when transferring the file, and will also be faster for everyone to decompress.

The decompression speed in MB per second can also be observed. 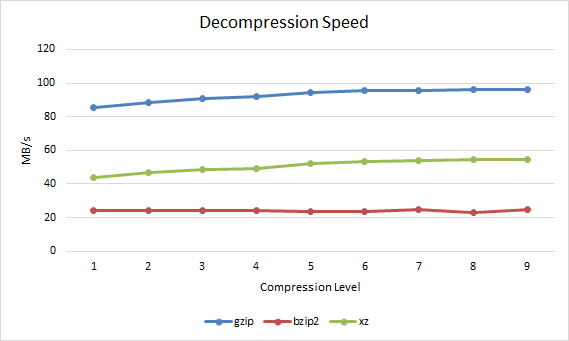 Based on these results, bzip2 is a good middle ground for compression, gzip is only a little faster while xz may not really worth it at its higher default compression ratio of 6 as it takes much longer to complete for little extra gain.

However decompressing with bzip2 takes much longer than xz or gzip, xz is a good middle ground here while gzip is again the fastest.

So which should you use? It’s going to come down to using the right tool for the job and the particular data set that you are working with.

If you are interactively compressing files on the fly then you may want to do this quickly with gzip -6 (default compression level) or xz -1, however if you’re configuring log rotation which will run automatically over night during a low resource usage period then it may be acceptable to use more CPU resources with xz -9 to save the greatest amount of space possible. For instance kernel.org compress the Linux kernel with xz, in this case spending extra time to compress the file well once makes sense when it will be downloaded and decompressed thousands of times resulting in bandwidth savings yet still decent decompression speeds.

Based on the results here, if you’re simply after being able to compress and decompress files as fast as possible with little regard to the compression ratio, then gzip is the tool for you. If you want a better compression ratio to save more disk space and are willing to spend extra processing time to get it then xz will be best to use. Although xz takes the longest to compress at higher compression levels, it has a fairly good decompression speed and compresses quite fast at lower levels. Bzip2 provides a good trade off between compression ratio and processing speed however it takes the longest to decompress so it may be a good option if the content that is being compressed will be infrequently decompressed.

In the end the best option will come down to what you’re after between processing time and compression ratio. With disk space continually becoming cheaper and available in larger sizes you may be fine with saving some CPU resources and processing time to store slightly larger files. Regardless of the tool that you use, compression is a great resource for saving storage space.