Windows Server 2003 was the last supported version of Windows to only use SMB version 1, now that it’s no longer supported Microsoft are planning on shipping Windows with SMB 1 disabled by default. It’s currently enabled by default for compatibility reasons, however when we’re in a world where SMB 1 does not need to be supported it will not be used.

SMB can be disabled both on the server and client side. We’ll first start off by showing you how to disable SMB version 1.0 on the server side (the system that offers SMB shares). Open PowerShell with administrative privileges. If we run the ‘Get-SmbServerConfiguration’ cmdlet, we can see that by default EnableSMB1Protocol is set to True, as shown below. 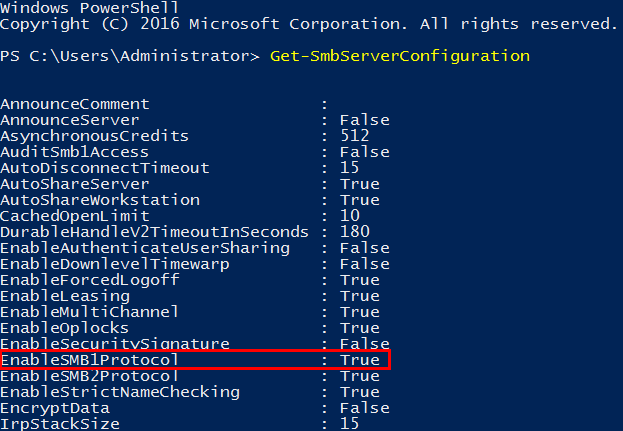 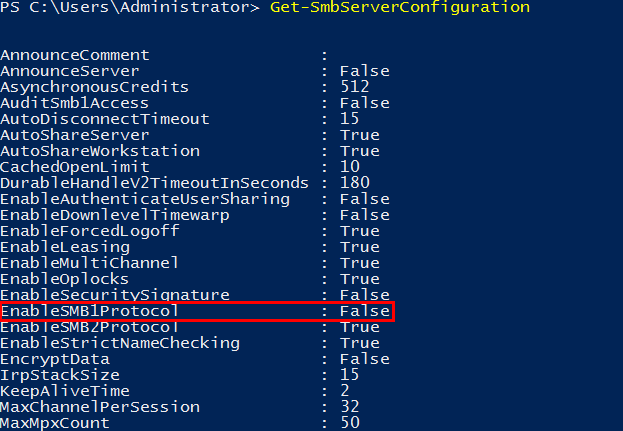 We can go a step further, and instead remove SMB version 1 from the server with the following PowerShell cmdlet.

Note that this will require a system restart to complete.

This is a good step to do after you’ve had SMB 1.0 disabled for a while and are sure it’s not required.

By disabling the server configuration as shown above, our server will no longer offer SMB v1 shares. The SMB client however is still able to connect to an external SMB v1 share on another server, unless we also disable the SMB v1 client. This is done by running the following commands.

With these steps you have now seen how to disable SMB version 1.0 in Windows Server 2016 on both the server and client side using Windows PowerShell.