The Server Message Block (SMB) protocol is used to provide file and print sharing in a Microsoft based network. To help detect man in the middle (MITM) attacks that may modify SMB traffic in transit, we can configure SMB signing via group policy. By digitally signing SMB packets the client and server can confirm where they originated from as well as their authenticity.

SMB packet signing is available in all supported versions of Windows. Microsoft also note that depending on factors such as the SMB version, file sizes, and specific hardware in use, SMB packet signing can degrade the performance of SMB, which is to be expected as we’re signing every packet that goes across the network, which adds overhead.

It’s important to note that this is not encrypting the SMB traffic, we are only going to configure SMB signing so that the client and server can determine if SMB traffic has been modified. SMB encryption has been added as of SMB version 3.0 and newer. 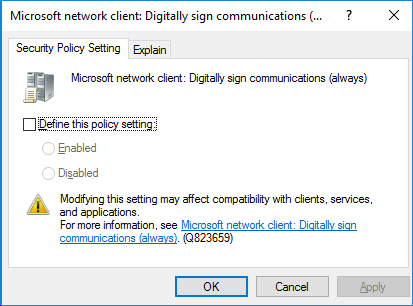 The following two policy items apply to SMB server, that is Windows systems that serve out files or printers for instance over SMB to clients witin the network.

Microsoft network server: Digitally sign communications (always)
This policy option controls whether the server providing SMB requires packet signing, it determines whether or not SMB packet signing must be negotiated before further communication with an SMB client is allowed.

By default this setting is enabled for domain controllers, but disabled for other member servers within the domain.

The following two policy items apply to SMB clients, that is Windows systems that connect to an SMB server.

Microsoft no longer recommend using the “if server agrees” or “if client agrees” options, as these options only affect SMB version 1, which you may want to disable anyway.

We can configure SMB signing via group policy on both the server and client side. By default it’s primarily used on domain controllers in a domain, however by modifying the four policy items outlined above we can protect SMB traffic at the packet level.

Exam Guides, Windows70-744, Microsoft, SMB, Windows
← How To Install LXDE GUI In Debian 9 Linux
Which Version Of Linux Mint Am I Running? →
Leave a comment ?