A few days ago, Cloudflare announced Argo, their new solution for a faster, more reliable, more secure Internet. My first thought was of course to perform an Argo benchmark to see how well it works.

I’ve previously taken a look at the Cloudflare Pro plan, and I’ve been paying for it ever since despite it not actually being of that much use to me.

Argo however appears to be exactly what I’m interested in, a new way of squeezing out yet more performance, so let’s find out how Cloudflare’s new Argo service performs with some benchmarks!

I’ll just quickly touch on what Cloudflare Argo is, I suggest reading their full blog post for full details.

From my understanding, before Argo, when you browse to a website behind Cloudflare, the request would hit a nearby Cloudflare Point of Presence (PoP). If an item is not cached from here the request would traverse the Internet to reach the origin, that is the web server that actually hosts the content.

Argo makes use of Cloudflare’s large global network and attempts to more efficiently route the traffic to the origin server over their own network while applying some smarts to improve overall speed. Argo will additionally allow a PoP to check other nearby PoP’s to see if they have a requested item cached before taking the more expensive path to the origin server, so cache hit rate should also improve.

Let’s first start off with a baseline test, that is a benchmark before our Argo benchmark. I wanted to test from multiple points around the planet, unfortunately I don’t have a bunch of servers spread out all over the place ready to use so I opted to use Pingdom’s website speed test. At the moment there are 4 different locations that I can test from, which are listed below.

This seems fine for a quick and dirty test, but for a full in depth Argo benchmark test I’d probably need to look at scripting AWS instances to spin up all around the planet to perform hundreds of hits to my website in order to get a better average. I might take a look at that in the future, but for now let’s see if this quick test shows any improvement.

I should also note that the origin web server is hosted in AWS on the US East coast, so unless we have a 100% cache hit rate some requests will be going back to this origin server. This explains why the Australia result is so much worse to the rest as it’s the furthest away by distance to the web server.

After accepting to pay $5 per month + $0.10 per GB of bandwidth, Argo was activated and I ran the tests again, results below.

Here’s how the difference looks graphically. 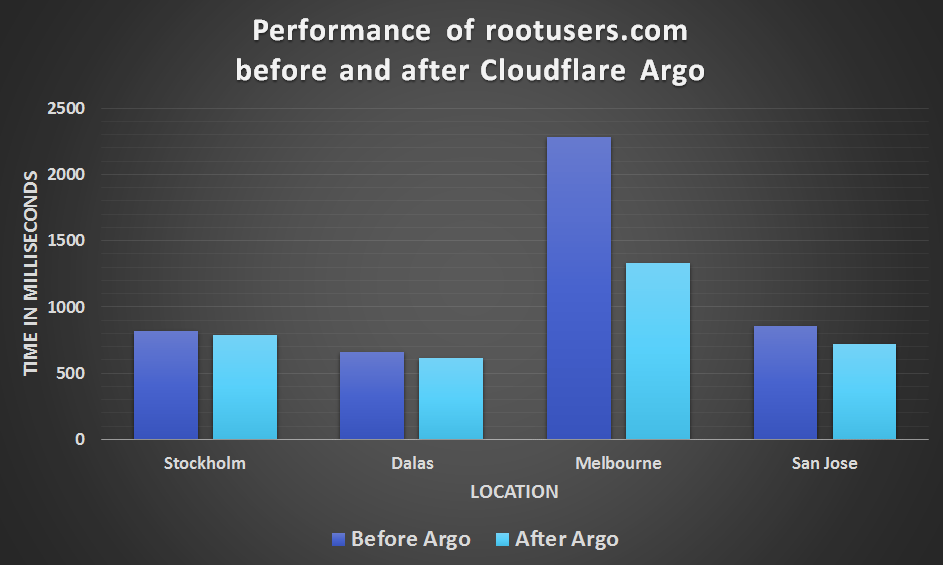 Based purely on these results, I’ll probably keep Argo for a while and see how it goes. I’m quite happy to pay for faster speeds, even if those speeds are marginal in most cases, perhaps I’m crazy. I think the price is pretty fair, it’s not a huge barrier to entry so if you test it out be sure to let me know the speed differences that you see with Argo.

This was by no means an in depth and conclusive test, but I believe the quick and dirty Argo benchmark results have shown that Argo does have something to offer in terms of speeding up your website further. I think it’s an interesting offering to the Cloudflare stack and I’m interested to see what they bring out next.