When Microsoft first made the Windows 10 Technical Preview available I downloaded the free ISO straight away and booted it up into a virtual machine as soon as possible as I was excited to see what was new. My initial reaction at the time was “finally, something better than Windows 8” and I couldn’t wait to get the final version.

Windows 10 has since gone through many changes through the various new builds that have been released, so I have downloaded and started using the most recent build (10049) to review and share some of the best new features of Windows 10 that I have found so far.

As you have probably heard by now the start menu has made its return into Windows 10, a welcome addition as I’ve been trying me best to ignore live tiles in Windows 8 for some time. The live tiles are still there, however they are there in combination with the more traditional start menu and you have the option of completely removing them if you wish. The full screen live tiles option currently in place in Windows 8 and 8.1 will also optionally be available if you’ve become accustomed to that over time and don’t want to make use of the start menu. 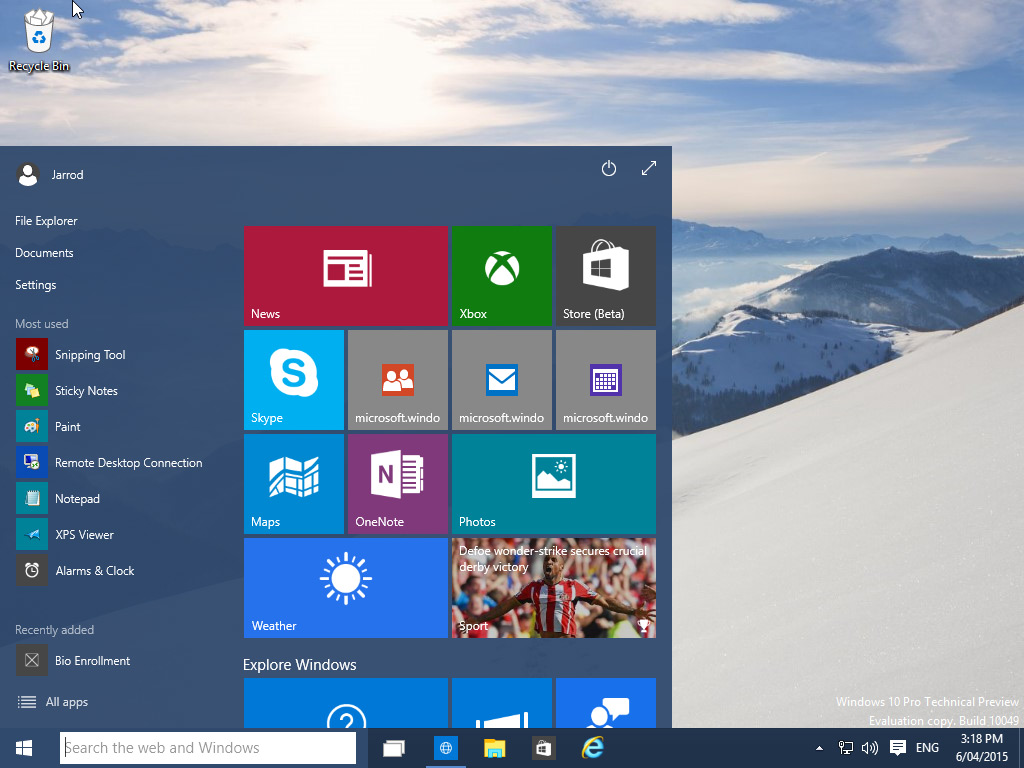 If you have been on the Internet for any amount of time, you would have come across a number of Internet Explorer (IE) related jokes. IE is well known for being a poor browser when compared to other alternatives out there such as Mozilla Firefox or Google Chrome, which is most likely why the IE name has been dropped in Windows 10 for their new web browser, ‘Edge’ which was code named Project Spartan.

The build of Windows 10 that I am using (10049, March 30th 2015) is the first publicly available release to include the Edge browser, which is one of the main reasons I wanted to test this build. 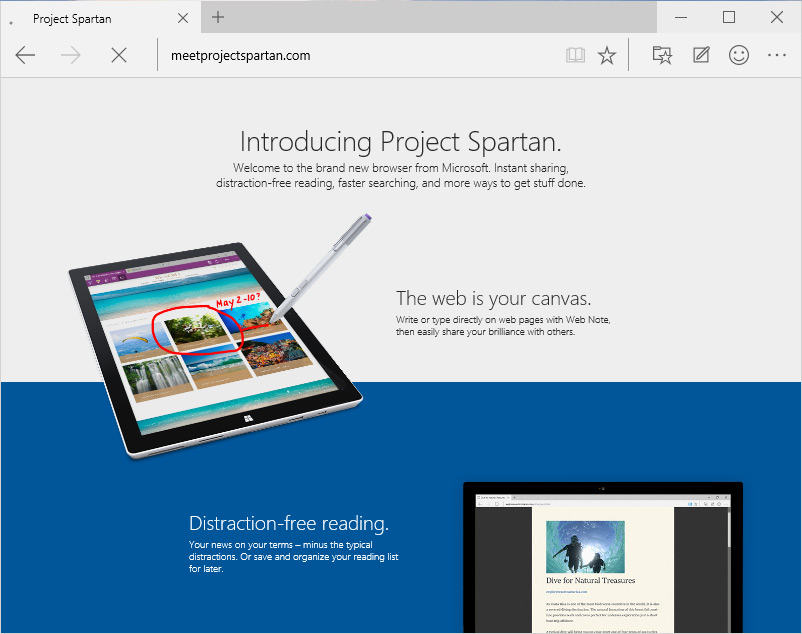 Edge definitely looks and feels much better than IE right from the start, opening and working straight away – something I never had any success with in IE. As this is only the first public release I would expect it to change quite a lot by the time Windows 10 has been finalised. In any case IE 11 is still available in Windows 10 for backward compatibility reasons.

Something both Linux and Mac OS have had for a while now to help increase user productivity is multiple desktops. These allow you to basically run multiple virtual desktops with different applications open and running within each, allowing you to quickly switch between what you’re doing. 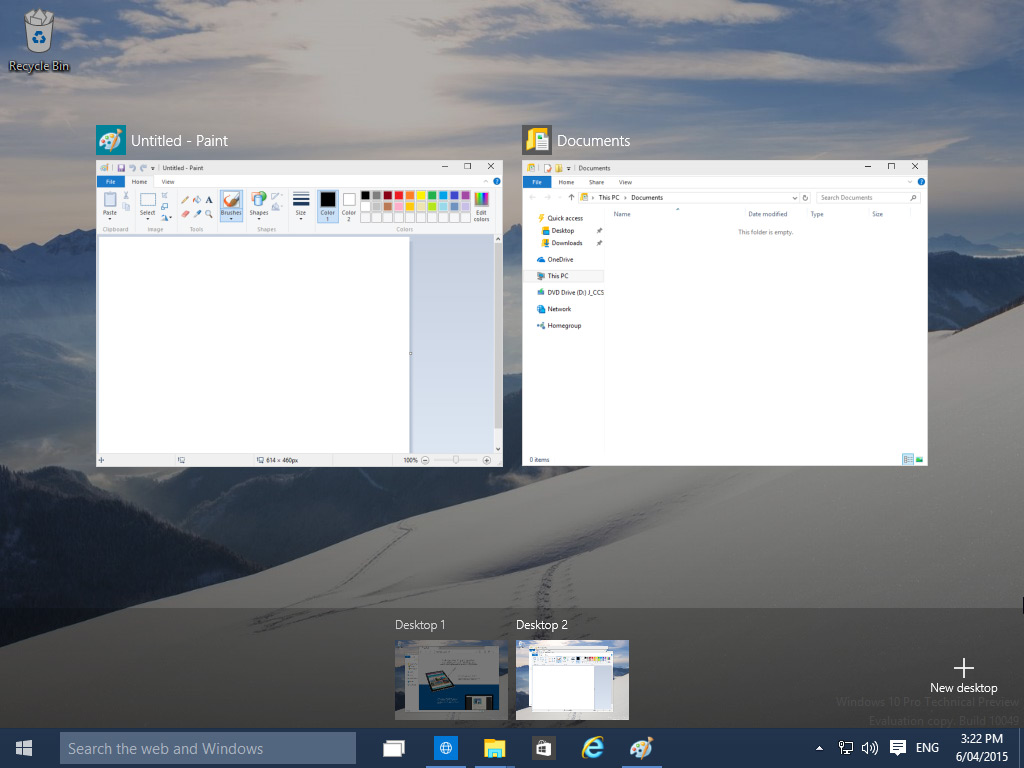 It’s great to see that Microsoft have included this feature in Windows 10 as I found this very useful in my test installation. You can easily move open windows or running applications between the desktop instances, or even move them out to their own new desktop.

Ever since I moved to Windows 8 something I have disliked is the metro applications which seem to only open up as full screen windows, completely taking over what ever I am doing, but also being difficult to close and get out of the way. This appears to have been resolved as Microsoft’s universal applications now open up in their own Windows, so they can be moved around more easily and closed like a normal window. 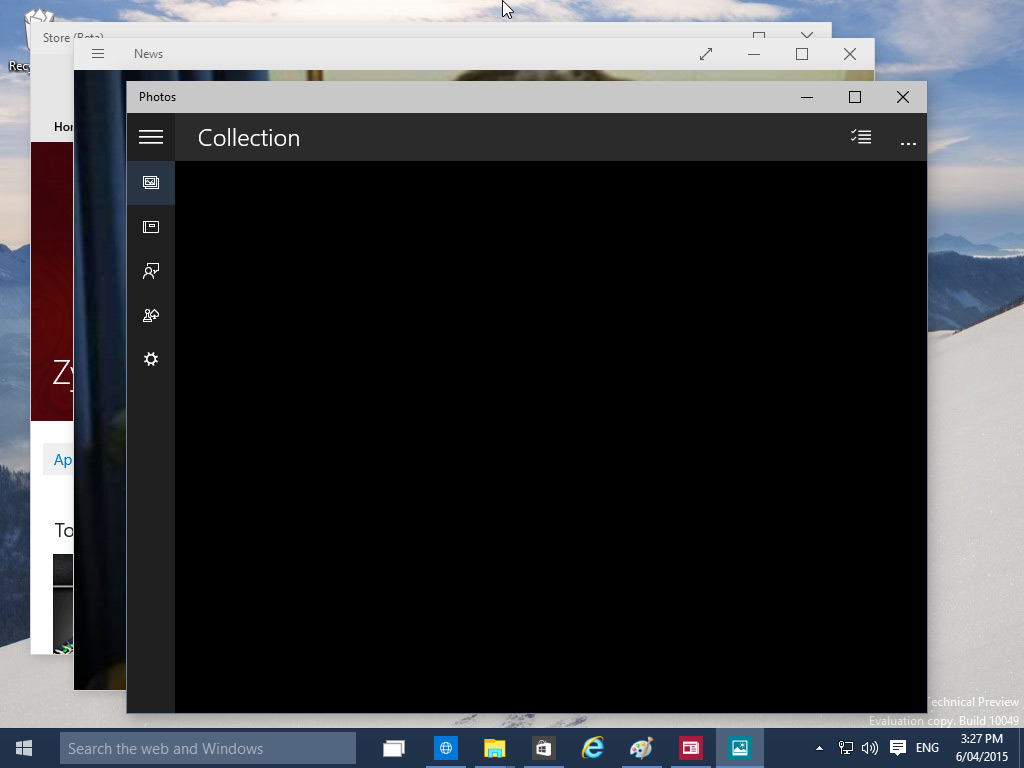 Ever since Windows 7 I have been a fan of being able to easily drag windows over to the far left or right hand side of the screen to have them automatically snap into place and take up half of the screen. Improving on this in Windows 10 there are now more options for dragging and snapping windows, for instance you can drag windows to the corners of the window to have them take up a quarter of the screen rather than half, allowing for 4 equally positioned windows displaying at once which will be really nice on larger screens. 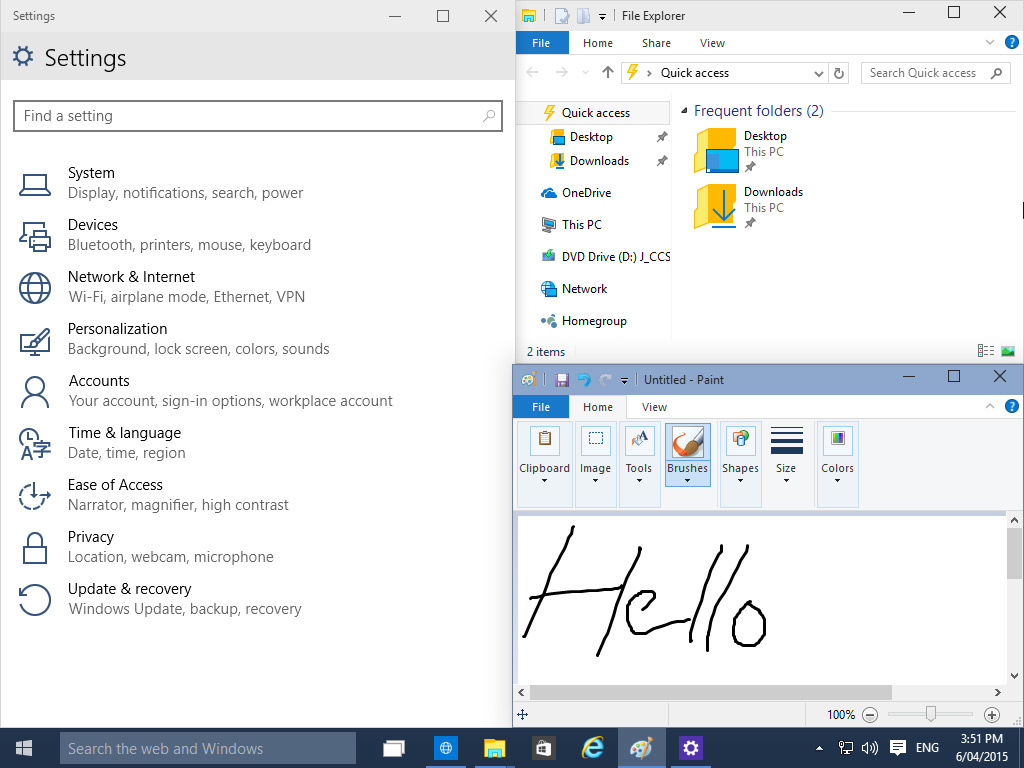 For the first year, Microsoft are allowing Windows 7, 8 and 8.1 users the ability to upgrade to Windows 10 for free. This does make me wonder how they intend on making money back on this latest version of their operating system which seems to provide significant improvements, however as a Windows 8.1 user I’m happy to see this and can’t wait to upgrade.

As outlined previously there are plenty of cool new features in Windows 10 which we can expect to see once it’s out of technical preview, from what I have seen in my testing it’s definitely going in a good direction so far and removing most of the issues I had with using Windows 8 and 8.1. As soon as a stable release is available I’ll be upgrading from my installation of Windows 8.1. Unfortunately I encountered too many issues and bugs in the technical preview to even attempt using it as my primary operating system, which some people I know have done with mixed levels of success.

What are your favourite new features in Windows 10 that you can’t wait to use?