Dual Intel Xeon E5-2670 server or workstation systems are fairly popular as the CPUs are quite cheap, but is it worth considering AMD’s newer Threadripper instead? In these benchmarks I compare the differences in performance and power usage between the 1950X and two E5-2670 CPUs.

I previously built a 16 CPU core server using two 8 core Intel E5-2670 Xeon CPUs, as these are fairly cheap and could be bought second hand for around $50 USD from Ebay when I picked mine up.

I recently upgraded to an AMD 1950X Threadipper workstation which also has 16 CPU cores, and I was interested to see how it would compare. 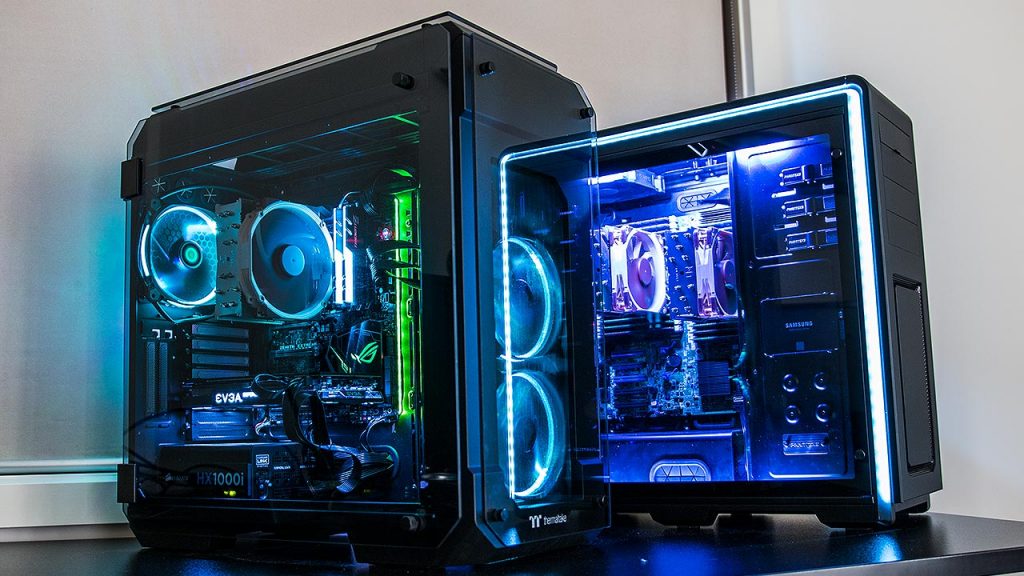 The Xeons are from 2012 while the Threadripper CPU is from 2017, so 5 years difference between them.

Both systems are running with 64GB of RAM, although the Threadripper system is running DDR4 at 2,666MHz, while the Xeon system is running DDR3 at 1,333MHz. Both systems are running Windows 10 pro for the operating system with all available updates installed. As I’m testing these from the perspective of being a productivity workstation, I haven’t included overclocking results for the 1950X or performed any gaming tests as they don’t really make sense here.

Of course we expect the 1950X to win as it’s quite a bit newer, but by how much? And are the cheaper options still worth considering with all these new choices? Let’s take a look at the benchmarks and find out!

Starting with Cinebench we can see that in single core the 1950X is a fair amount in front. Although you can get much better single core performance with consumer grade Intel chips this was still important to test. 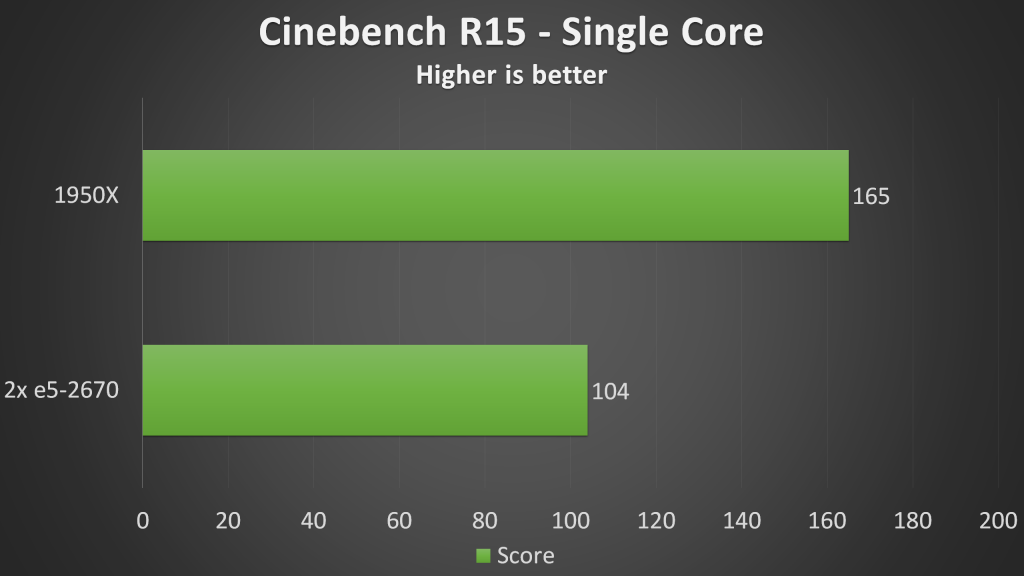 The multicore results are where these two high core count systems shine, with the 1950X still a fair amount ahead of the Xeon system. 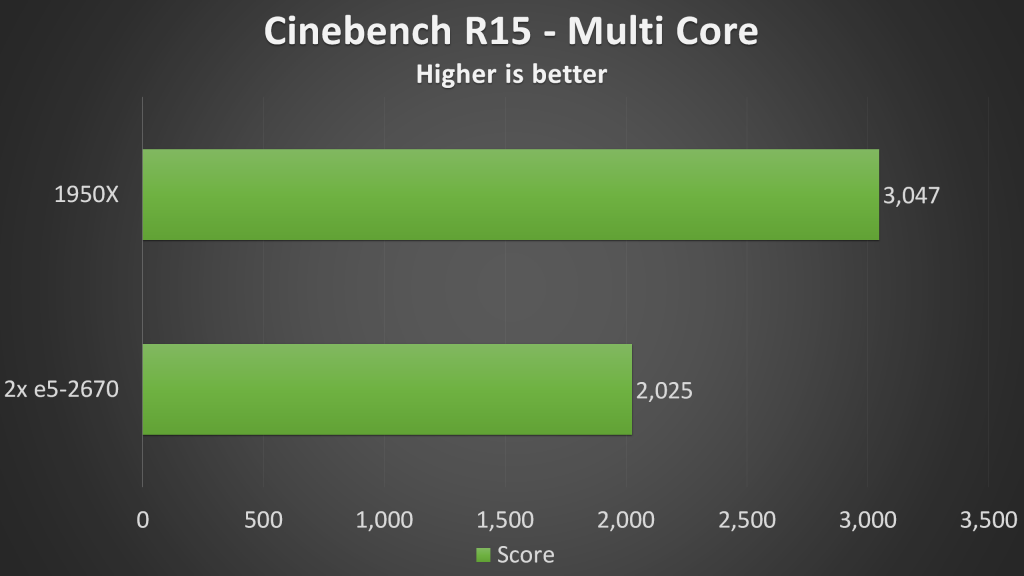 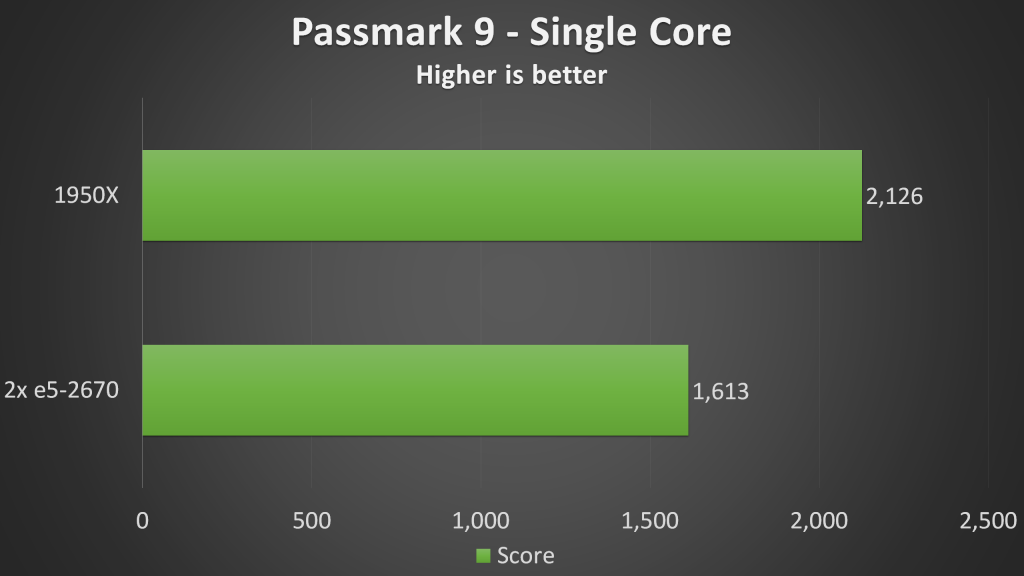 The multicore results tell a similar story around the 30% difference mark. 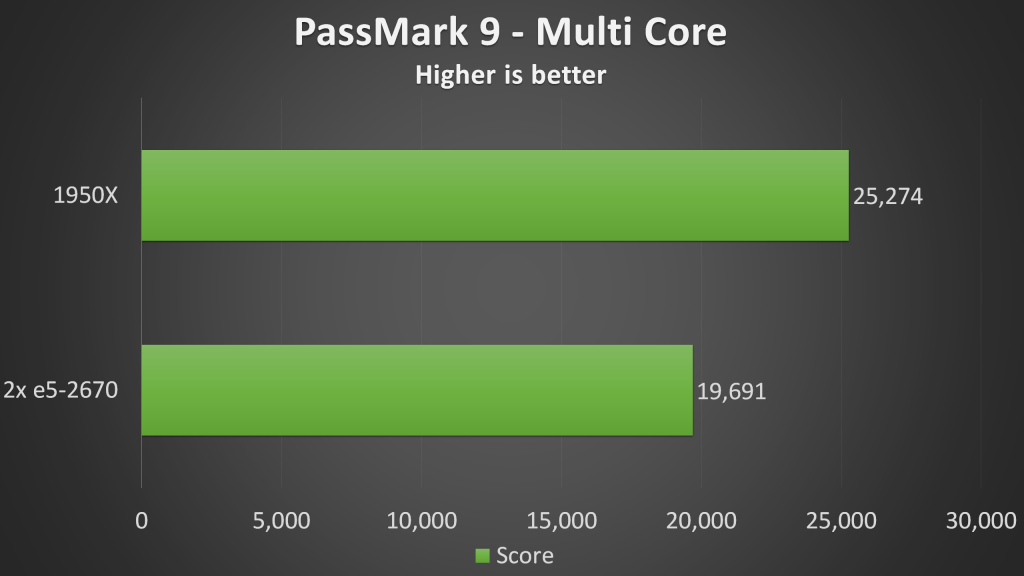 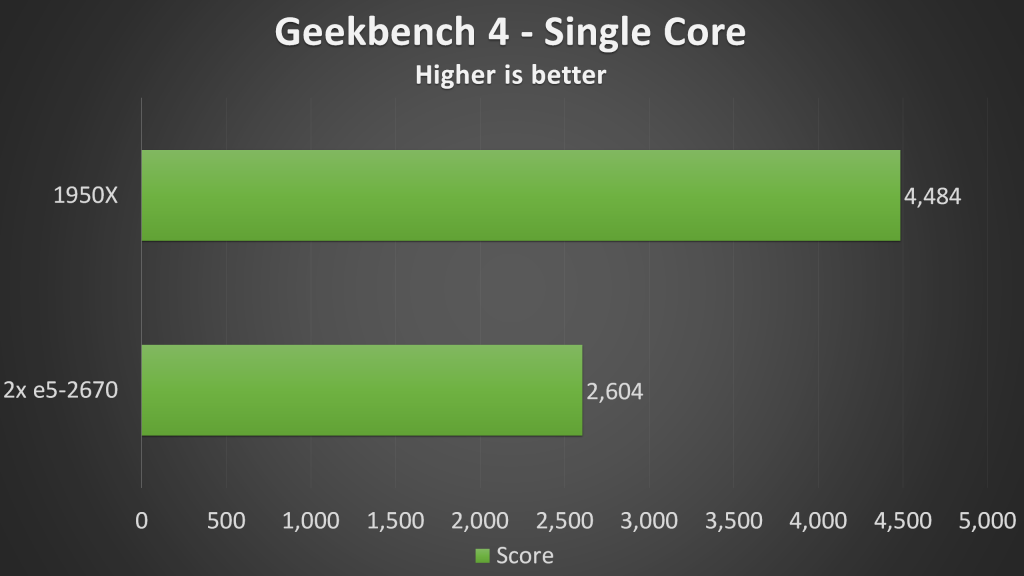 Swapping over to the multicore result brings things a little closer together though with just a 40% difference, so it would seem that something in this particular test favours the Threadripper chip for single core performance. 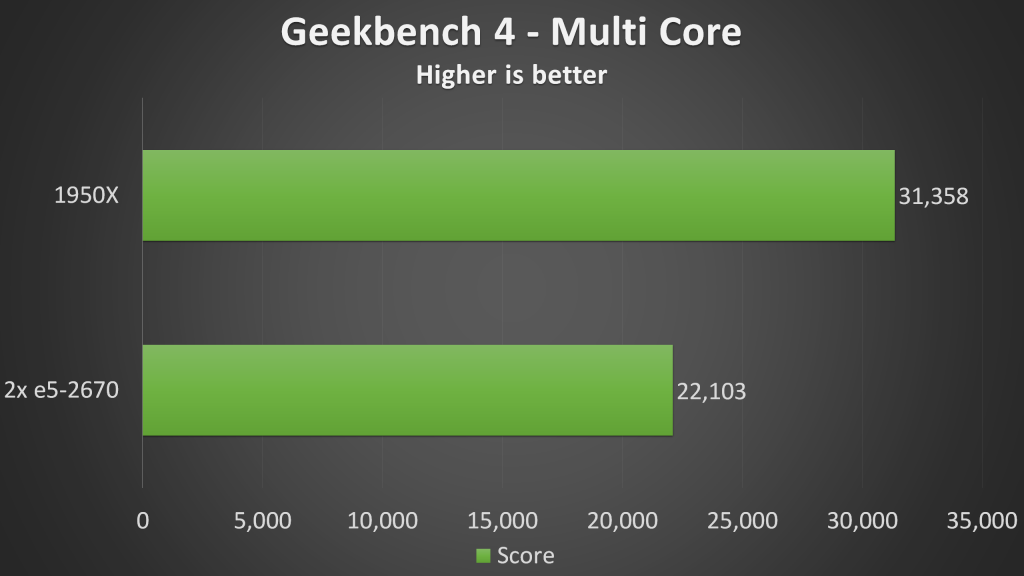 I’ve used the 7-Zip benchmark with a 32mb dictionary size to test compression and decompression, and we can see that the compression speeds aren’t actually that far apart, however the 1950X is quite far ahead when it comes to decompression tasks. 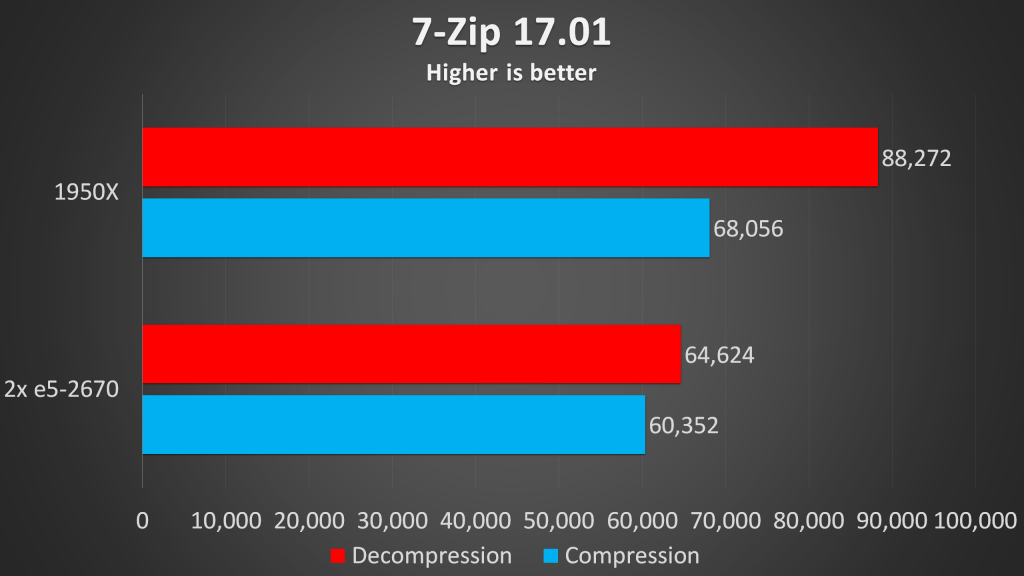 VeraCrypt was used to test encryption and decryption speeds. With a 1GB buffer size we can see that the 1950x is performing quite a lot faster than the two Xeon CPUs, around 67% better. 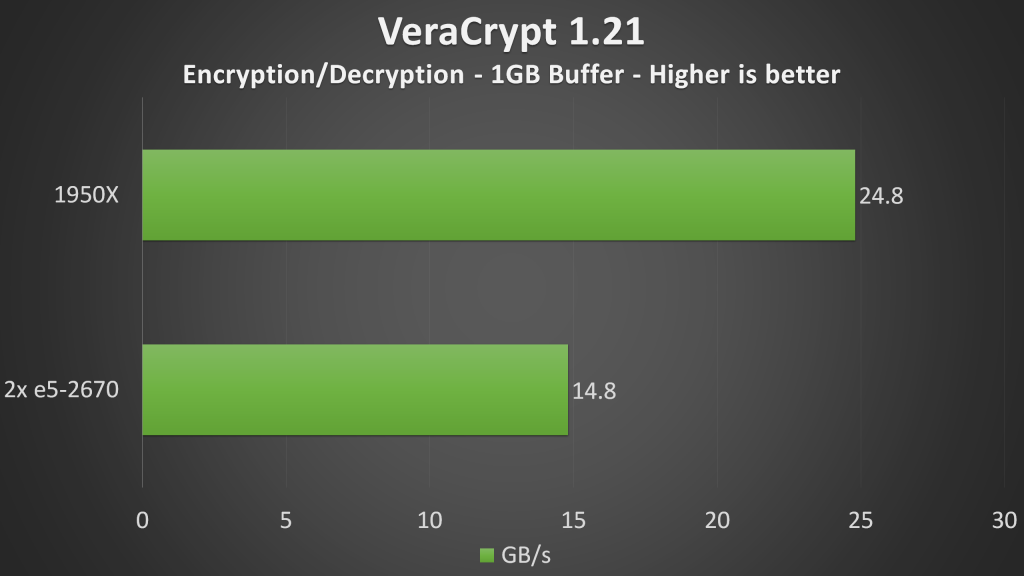 The Corona 1.3 benchmark renders a scene using CPU power only, in this test we can see that the 1950X completed the task faster, around 36% quicker, only less than half a minute faster. 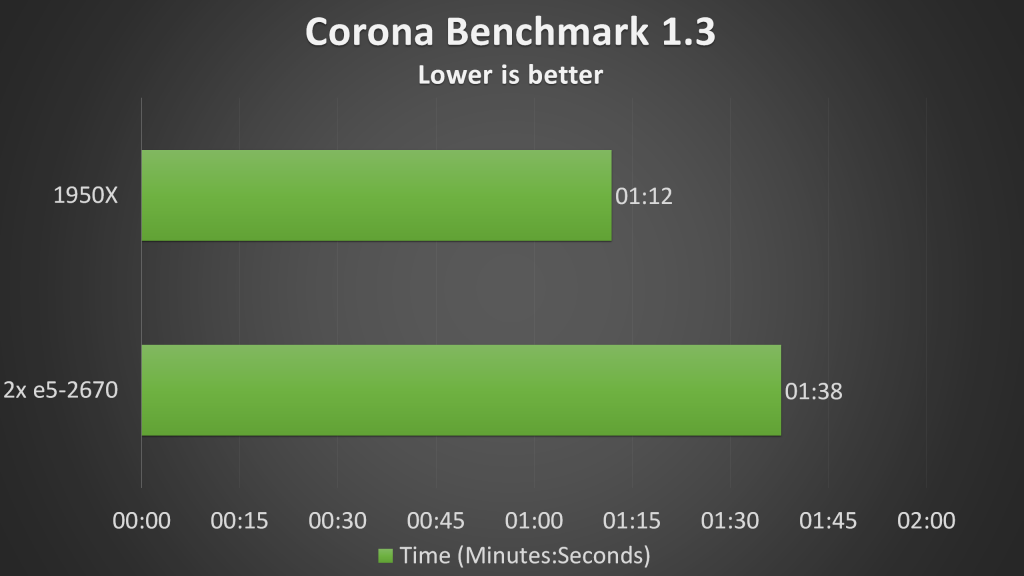 Now let’s take a look at some video encoding, with Handbrake I’ve encoded a 1080p h.264 video file to 720p, and we can see the 1950X was a fair bit faster. If you had a lot of footage over time it would add up to quite a big difference. 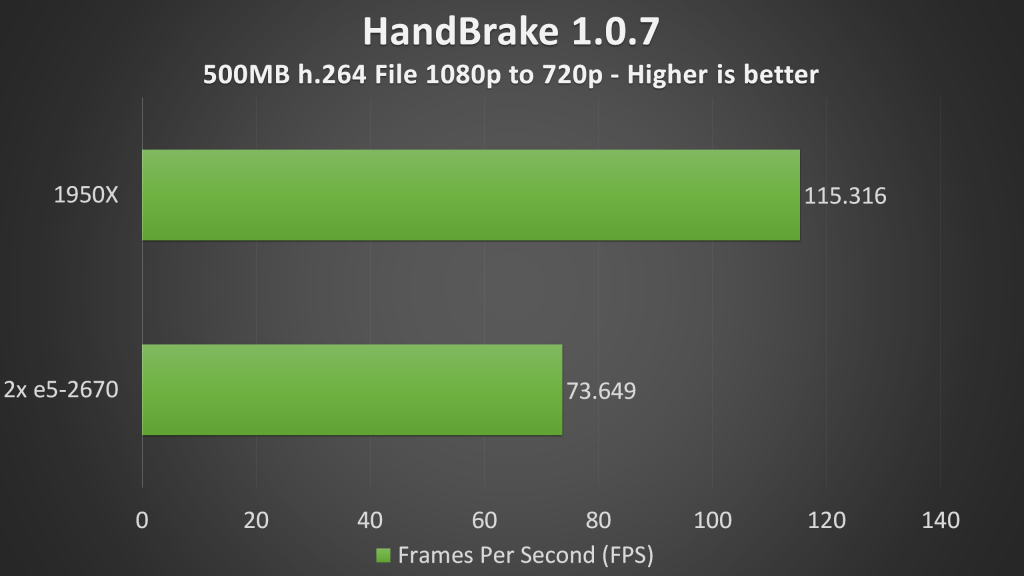 In Adobe Premiere I’ve rendered a video which goes for around 10 minutes at 1080p. GPU acceleration was disabled for the test, these results are CPU tests only. 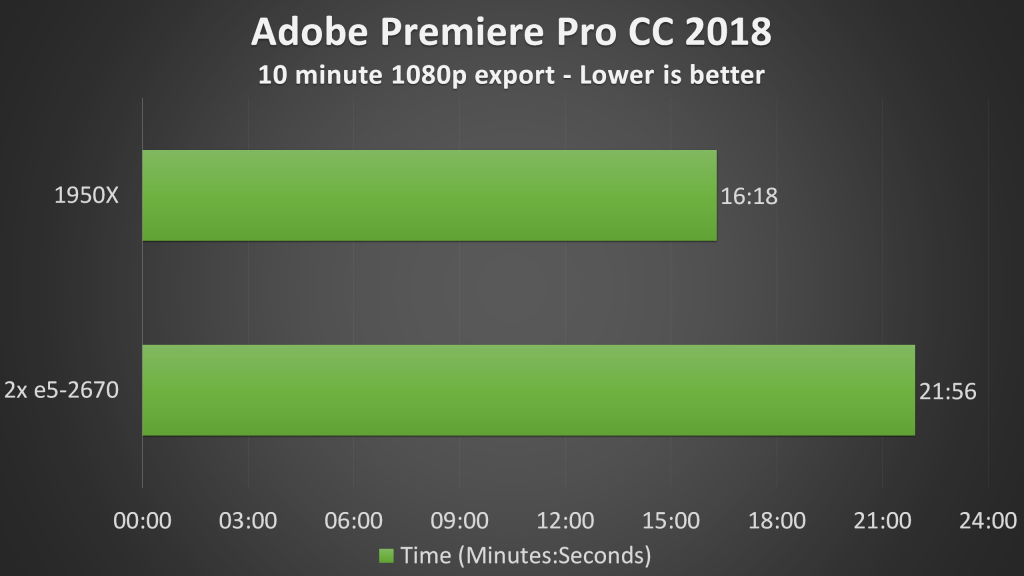 We can see that the 1950X completed the same task more than 5 minutes faster which is around 34% quicker, again this would start to add up if you did this regularly and would be even larger with 4K footage.

From the results we can clearly see the 1950X is winning in every test as should be expected, it’s a 5 year newer CPU and is more expensive. On average throughout all tests the 1950X is performing 44% better than the two E5-2670 CPUs, not bad at all.

Raw performance isn’t the only important factor, what about power usage? 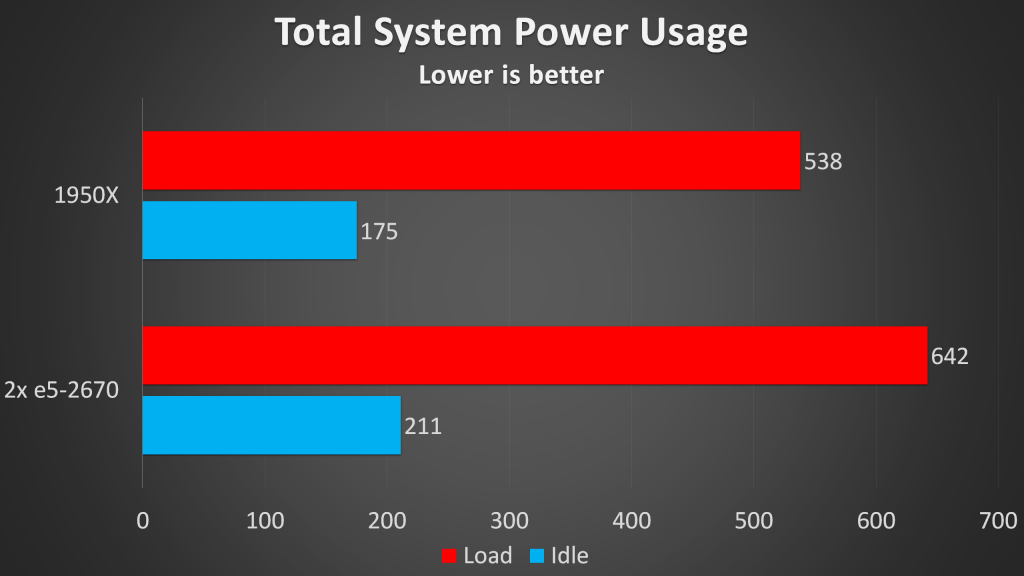 Well it’s not so great for the older Xeons here either, drawing over 100 watts more when maxed out, and around 40 at idle, so you’ll be paying more to run the older system.

Let’s talk about cost for a bit, the 1950X is currently $999 USD at the time of recording, while I saw the two E5-2670 CPUs available second hand for about $50 USD each on Ebay when I bought them, however they appear to have gone up a little in price lately due to lower supply.

The cheapest Threadripper motherboard at the time of recording goes for about $339 USD, however the dual socket xeon boards even second hand can cost anywhere from $300 to $600 USD, they’re quite expensive for old used boards and can be difficult to find. I was lucky to get my CPU, RAM and motherboard for the Xeon system as combo from natex.us, so I saved some money there.

Unless you can get a really cheap motherboard, I find it difficult to recommend building a dual Xeon 2670 system, as AMD’s Threadripper is a much newer platform in comparison, although this comes at an increased cost. Although the extra performance is nice to have, in multicore applications the Xeons still did a pretty good job, however the single core results are a little low making them difficult to recommend unless you’re only using them for multicore workloads.

So which of these options would you pick for a home server or workstation? To be honest I don’t really have a huge need for the server anymore, as the desktop has more than enough processing power for what I do. With that said it’s good that there are still somewhat budget friendly compute options available to get heaps of cores.